Against all odds, this year, we have seen a growing interest in educational robotics in our Institute.

As in previous years, we teachers of the educational robotics team, carried out an information and awareness campaign for our students of the second and third classes.

The surprise for us trainers was remarkable in observing the curiosity and passion that we aroused in them.

In short, we saw our group grow to over 40 students.

The activities regarding the preparation for the regional Rescue Line competition of the Robocup Junior involved in an afternoon commitment for our students of about forty hours.

During these meetings the mentors introduced our students to educational robotics and in particular to the knowledge of the Lego Mindstorms kit.

Soon they became autonomous and learned to design and build their robots with which they challenged each other on the competition field of our institute.

It was a very strong competition that eventually saw 2 teams prevail ready to face the regional and then national competition of Robocup.

Much disappointment has therefore raised, in our guys, the news that, due to the pandemic, the competition was first postponed and then cancelled.

In addition to the preparation of new students, the school has seen itself engaged in the growth of seniors team.

Our institute has, for some years, seen its possibilities grow in terms of competition at national level, until reaching a prestigious result in the 2018-19 school year competition held in San Giovanni Valdarno, during which our two teams ranked fourth and ninth.

The team that finished in fourth place then took part in the European Championships in Hannover, placing it in eleventh place.

On a technical level, with seniors' students' team, we focused on the overall remaking of the robot project which with the structure and the software created so far, was no longer able to be competitive at a high level. In particular, the focus was on catching the balls by developing a mechanical gripper system for the first time. In order to apply the changes conceived and designed, it was necessary to rethink the entire system by adding more sensors and motors. This is why, we focused on understanding how to manage to interface the Lego kit with Arduino. We experimented with various interface methods, tried various programming languages and in the end, we created an Arduino Lego hybrid, programmed by the RobotC language which allowed us to achieve appreciable results.

Now our robot is almost perfect in the line following and, in the evacuation zone, manages to score, with a little luck, some balls in the high triangle.

Overall, we can say that we have done a good job.

Our guys, who came back very charged and motivated by the European competition, were able to give the best of their skills to set up the new robot that we hoped to see compete in the national race in Pescara, but unfortunately this was not possible.

For the new 2020 rules, we have not had the opportunity to work on, because we are still focused on solving the difficulties concerning the old regulation. We find that the new rules are very complex and difficult to solve technically for our level of preparation. Also, because, experienced students have finished the course of study and leave to novice students who have to start all over again, and, before reaching adequate preparation levels, they had spent all their course of study in our institute. 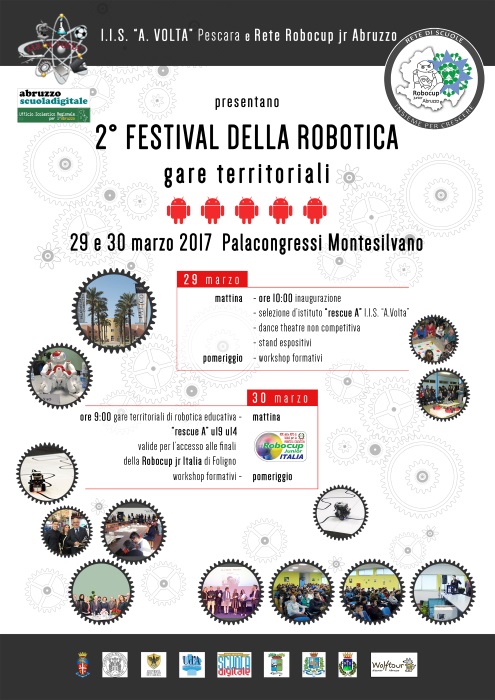